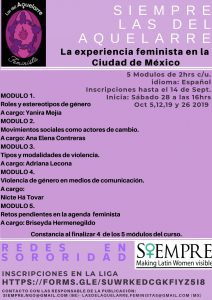 Those of the Collective Feminist Coven
Home: February 2016.

We are feminists of various disciplines, but all human rights defenders. We were born with the idea of building ideas, making alliances, spreading media topics that cross all women, positioning the feminist agenda that by nature is an agenda of the human rights of women and girls.

We provide guidance and accompaniment to various cases such as self-suggestive or  assisted abortion, orientation to cases of sexual violence and all sexist violence in its various modalities.

We develop actions and adhere to other causes, in the face of the problem of structural violence experienced by women, we are outraged and organized to take to the streets together.

Within our agenda is the visibility  of gender-based violence, the denunciation of femicides, the promotion of sexual rights and reproductive rights.

We teach gender courses for private initiative and for some public spaces. We give talks and conferences related to the human rights of women and

Conveners to the first national march #24a Annually we carry out The March of the Catrinas (since 2016) launching the invitation to national mobilization (18 States mobilized with us in 2018 on November 2).
We have participated in the citizen observatory for the Review of the Vive Segura App in Mexico City together with the INMUJERES del D.F., UN Women and various civil society organizations, human rights defenders, feminists and activists.
Let’s talk in Plural, radio program at the IMER (Mexican Radio Institute) from where we made important national links to give voice to work and feminist struggle.
Campaign: “This is Machismo” on social networks 2018 Campaign: “I also aborted Mx” 2019
Campaign: “Gender Violence Lives Among  Us” consists of 5 videos currently circulating on social networks with the requirement of the activation of the Gender Violence Alert in Mexico City. 2018-2019 Members of the Citizen Observatory for #AVGCdMx (Alert of Gender Violence in Mexico City).
Speakers in spaces such as UNAM, mayor of the State of Mexico, Maremoto (at the Mining Palace), Module of Legislative Attention and Citizen Care in the Mayor of Miguel Hidalgo.