(Brussels, 12 November 2018) The nonprofit organization Siemprewill be launching its manifesto this Tuesday, November 13th, in the Brussels headquarters of the European Network Against Racism(ENAR) as a call for the empowerment and inclusive participation of the female Latina´s diaspora in Belgium.

The discussion of the manifesto will take place in one of ENAR´s conference halls (Rue Ducal, 67, Brussels) and it will also be an occasion to celebrate the recent membership of Siempre to the host institution.

Along with the statements divulgation, they will also reunite forces with their allies and they will generate a debate program that intends to uncover Siempre´s challenges and structural goals.

“We work as a unified network, using our voices to make ourselves visible as migrants and as bearers of bio-aesthetic and cultural diversity. We weave a collective fabric of alliances with sisters from diverse backgrounds to provide a platform for their knowledge and empower their participation” quotes the document.

In one of the fragments spread through the official Facebook account Siempre Vzw Ngo, they assure to have tasked themselves “with making Latina’s women visible, considering their different origins, cultural contexts, and labor, as well as both their formal and informal education and with recognizing their ethnic and cultural diversity”.

Its name is the acronym of the mainworking areas: Science, Integrity, Empowerment, Mobility, Renewable & Educational Projects.

Founded by two Mexicans, Dr. Ana Valenzuela, scientist, researcher and author; and Tamara Cruz, artist, artisan, and politician of Groen; Siemprerises as a platform to denounce the problems of migrant women. 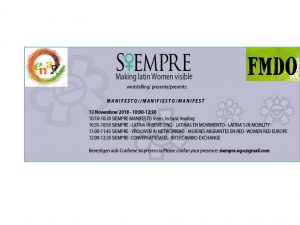 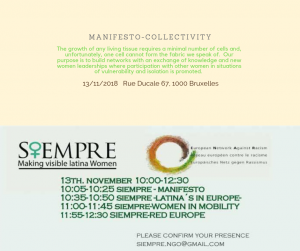