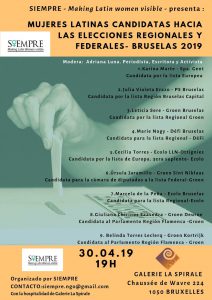 Latina Women Candidates for the Régional and  Federal Elections. Brussels2019.

Part One: Presentation of each candidate to which party it represents and what are the main topics within its program.

-Giuliana Chirinos: As a party issues of environment, health, air quality are the main axes of action. Issues related to migration and integration are part of the challenges that are faced during the arrival of migrants, refugees and asylum. Discrimination as a starting point serves to review the various problems that arise from there to the population. Superdiversity and promoting practices that enable living together and well-being are essential in the Flemish and specific region in Antwerp. Learning a language, employment, discrimination and social inclusion are part of the support programmes that can be developed through awareness-raising for better reception.  https://www.groendeurne.be/stem_vijf_groene_deurnenaars_naar_het_parlement

-Marie Nagy: Current member  of the municipal council and the police. As a party they forese social issues such as access to justice, social inclusion, generating equality and joining actions to combat climate change. As a candidate of Colombian and European origin, support for migrants in the search for a solution during her first career are main axes of her campaign: migrants from different backgrounds, the need to generate ties between the different diasporas for coexistence. Segregation is one of the issues that most affects employment, support for integration, spaces to include migrants and support them in building their own job opportunities.  https://www.marienagy.be/

Marcela de la Peña: Feminist militant in Europe, Africa participates in different areas against patriarchy. As a party they consider issues to solve problems that are lived in the city Brussels such as the environment and equality and as an open candidate proposes to carry out gender issues to the public agenda, social inclusion of migrants from the perspective of activism to regularize migrants “without papers” and access to the visibility of marital violence in prevention. It understands migration with clear  but limitless criteria for linking the problems faced by women, domestic workers and employment.. https://ecolo.be/programme2019/

Julia Violeta Erazo: Feminist and socialist militant. As a party, social issues such as pensions, unemployment, access to paid work, discrimination and better regulated spaces to avoid inequality. As a candidate she reviews the problems that during the migration journey without difference of origin since the obstacles are the same for everyone. In his vision of citizens and humans he has focused on the problems that afflict both men and women on equality. It recognizes that the struggle and defence of rights is for equality between men and women. Today’s austerity is a result of how it has affected the rights of the population. Improve  practices  to carry out surveillance in work practices.   http://unisenixelle.blogspot.com/

Leticia Sere. Mother two children, printer, communal councillor and police in  Schaarbeek. As a party; mobility and green spaces, the recovery of places to live together and conserve healthy and safe environments are a priority. As a candidate: identity, the preservation of the mother tongue, fostering the coexistence of different cultures and the participation of women and giving them access to programmes from a female perspective are priority.  https://www.groen.be/leticia_sere

Luis Barbarán decided not to participate as a candidate and remain as a spectator.

2nd. Part Problems of migrants during integration processes, as candidates as they consider facing them.

Giuliana: as a migranta reviewed from her trajectory the difficulties that are experienced as a newcomer, especially the time to learn a language and integration practices that must be reviewed in detail as they are:  equivalences, the talents of the person that should be considered as experience. Combating  the discipline,racism and problems that arise in society. They are part of the social debate since a number of stereotypes and taboos develop from there that affect not only well-being, but also psychosocial behaviour and reactions within different social sectors must be recognized as incorrect practices so that they can be punishable.

Marie Nagy: Recognizes that the effort you experience in reaching a society without knowing, speaking and understanding as a strong experience. Since their bicultural experience he has developed the bridges to appreciate talent, currently they have developed a program to recognize skills and competencies and not limit the revalidation of diplomas. The situation of Latin Americans in labor matters has two aspects, the first being the need to search and find. And the second is to generate their own (business) sources of employment on that path, it is important to help them discover the steps to be taken in administrative and tax matters.

Marcela de la Peña. The main problem he reviews is the arrival of migrants and the invisibility of the person and their competences, how they lose their professional experiences and how problematic recognition can be: the first legal, the revalidations of professional skills, knowledge and work experience. She proposes that the rights of women working in cleanliness should be recognized and that transit migrants should be supported with a specialized information centre that can guide and provide timely information. On another issue, bring the individualization of rights since many women cannot access a legal stay because they depend on their partners in order to be regularized. Cases where there is violence this creates other problems that are not seen but that are lived.

Julia Violeta Erazo. Migrants arriving in irregular conditions have enormous difficulties in accessing legality and in the meantime suffer a number of problems that do not allow them to access socio-economic development, they will add different obstacles such as language, discrimination and inequality that generates problems not only socioeconomic but health, proposes to change service checks to recognized legal contracts since this will not allow them to have real supports by placing them at risk constantly.

Leticia Sere. Language is one of the main problems to learn, the time to learn only one of the official languages generates inequality, for this it proposes to create bilingual schools that allow them to advance children in learning simultaneously and generate better spaces both to be able to learn the official languages but also to live together. Another topic reviews that the emancipation of women can lead them to carry out their own jobs. Supported by consultation spaces and creative  start-ups to promote the circular economy. There are many empty spaces in the center that are being found and can be used to generate self-employment. Lower the tax at the federal level to those who earn the most and participate in these practices to promote employment.

3rd. Part. Violence, Femicide and accompaniment during the social and legal process.

Monica Weissel  contextualizes all forms of violence and she talks about the practices that arise when founding the Collective for two Latinas for 10 years. She tells how from the vulnerability of women and also being a migrant it is almost immediate to put hemselves at risk to live and fall victim to issues related to marital, child violence, psychological and institutional violence.

Giuliana Chirinos: Facilitate and support the victim to  report, make an awareness-raising program to prevent all kinds of violence. In Flemish  region there is little talk of violence and therefore no action is taken to reduce it.

Marie Nagy: proposes to create a specialized centre by experts, universities and members of civil society organizations so that they can follow up on time and analyze the data in a timely manner so that they are valued and able to recognize the dimension of the reasons for documenting the problem. Currently there are 30 to 40 women daily victims of violence in Belgium (2 times more  than in France), 70% of complaints are not tracked and only 11% are convicted. They propose to recognize Femicide in the penal code.

Marcela de la Peña: Talks about structural, domestic institutional violence and eliminates the classification of violence without follow-up, promoting training at all levels of government so that from there the responsibility for the fight against violence is promoted in all its manifestations and at all levels.

Julia Violeta Erazo: recognizes the absence of follow-up to cases of violence. The problem is structural and legal work must be done, it proposes to review the issues of violence against women. Involve judges, in order to modify the constitution and recognize that it must be a call to all citizens, social, legal and justice services in order to change including civil society associations and each from their role and responsibility.

Leticia Sere: agrees that street haarceration is one of the main problems to implement and review what are the different forms of attention against violence that are lived in public spaces and also private ones. Victims’ records need to be carefully reviewed and monitored so that when they call police, social services and psychological supports they are sensitized and provide timely services and follow-up.

-It is essential to review the term Feminicide at the legal level, to hold those involved accountable.

-It is proposed to make a consensual review of violence towards Migrant Women.

-Recognize violence as a structural social problem to influence different levels of government.

-Train social and police officers under the Istanbul Convention.

Conversation organized by Siempre on May Mayo 30, 2019 in Brussels Belgium.